We had tickets to both events since food vendors were originally split between the two; with some only slated to be in one but not the other. (We learned later that the organizers allowed those who were not staying for the evening event to stay in hopes of making more sales.)

The day event looked like a hard sell for the patrons with an almost empty parking lot at 3pm when we got there. We spoke to a few vendors as we made our rounds to those who was not scheduled to be there for the evening event and confirmed that it has been a really slow all afternoon. We strategized a divide and conquer strategy as we had in the past with other food events we’ve covered, but there certainly was no need here. There were no line ups and we were able to sit at a table with an umbrella even after we had left it to get more food & drinks. But we did what we came here to do – eat! With fistfuls of $5 bills, we started vendor surfing!

We immediately hit Buster’s Sea Cove food truck since we got there starving. We had the octopus taco, fish taco, and lobster sandwich. The octopus meat was slightly tough but that could have been from it sitting in the warmer too long and not getting served. But it was still very good and enjoyed by all. In fact, we ordered another one for good measure. The Lobster was okay, but the fish was nothing to be desired. It didn’t wow us like the other two, which had so much flavour. The fish tasted bland after having both the octopus taco and lobster sandwich.

What: Pabellon Arepa
Where: Mango Pinton

A little disappointed with this sandwich. We were looking forward to a tasty arepa (South American flat bread made from ground corn dough) and tasty pulled beef but instead the black bean overpowered every thing. The arepa was stuffed with loads and loads of beans, while there was very little pulled beef and cheese on top. It became very messy to eat and was not conducive to food event-style consuming – eating sans table and cutlery. We would have preferred a smaller, manageable, amount of black bean so that you an eat it in its entirety. We ended up throwing it away after one or two bites. It only had the distinct flavour of the black bean and nothing else.

What: Fried Chicken Wings
Where: Esé

Another disappointment for us was Esé’s deep friend chicken wings. It was deep fried, but not all the way through. It had a crispy batter and skin, but other than that, the meat inside was just bland, tasteless chicken white meat. There were two choices for sauce; one we were told was mild and the other hot. We had the mild and it wasn’t even that. It was very bland with no memorable hint of spice or flavour.

What: Hand-made Cannoli
Where: Terra Nera

To end Crave TO day, we visited Chef Roberto Marotta’s Sicilian street food tent and had the pistachio and chocolate hand-made cannoli(s). What a way to top off what an otherwise disappointing afternoon. We liked this one a lot. Perfectly crunchy cannoli and creamy filling with pistachio bits on one end and chocolate flakes on the other. Just delicious! No complaints here. 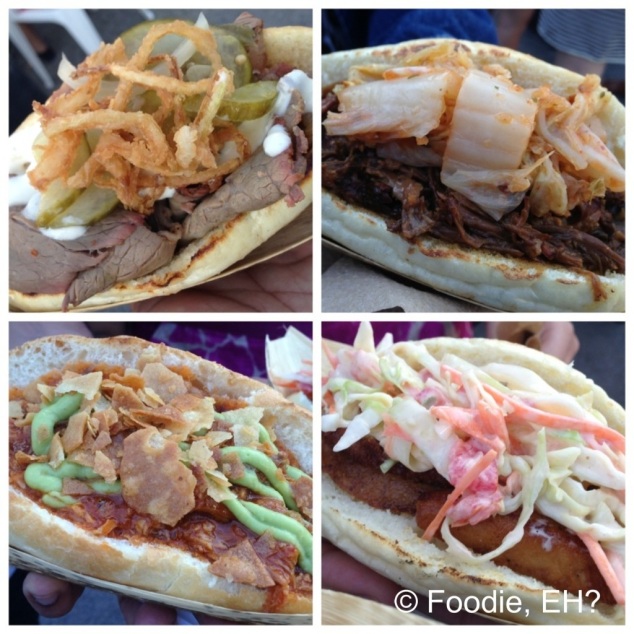 The first one for the evening was Fidel Gastro’s food truck named Pricilla. The line was already forming so we hit it first. We had (top, l-r) The Rubano, Killzilla, (bottom, l-r) Sgt. Slather, and Captain Belly. The Killzilla was a little salty but could easily have been evened out by adding a bit more of kimchi. The spice and sour flavour of kimchi can lessen the saltiness of the dish. Maybe they usually put more. We felt it needed more kimchi. Other than that, liked all our choices here and would recommend you try them. Make sure you check out Fidel Gastros if you see the truck. It’s been voted the number one food truck in Canada!

Next, we hit Hot Bunzz. Hot Bunzz has taken Asia’s meat-filled steamed buns (siopao), and changed it up to meat-filled flour-based bun that’s baked. We had the Bison Short Rib and Brazilian BBQ Beef, which were both a win in our books. You gotta hit up their location on St. Clair (Yonge St. and St. Clair) if you miss them in this summer’s food events.

What: Fresh Oysters
Where: Höly Crab

We decided to try Höly Crab’s fresh oysters to break from all the deep fried items we’ve been having thus far. We weren’t told where the oysters were harvested but they were smaller than the ones we’ve had in these events. They had a number of sauces to add including a generic shrimp sauce, a Japanese-inspired one, and a few others. I kept mine simple with just sprits of lemmon juice, but the group tried the others. No complaints from them on any of the sauces or freshness of the oysters. So that’s a win for us also.

What: Chocolate Churros
Where: Pancho’s Bakery

Last but not least, Chocolate Churros from Pancho’s Bakery food truck, which made its debut at CraveTO. It was a little crispy/hard for us and appeared a little overcooked. Maybe they are still working some kinks out since it’s their debut. We look forward to trying them again as they roam the streets of Toronto.

Not to be missed:

We only got to try one brewer from the four that was there. We frequented Tromba Tequila’s booth more and used up our drink tickets there.

Overall, thumbs up to the Crave TO organizers for curating a good selection of food trucks and vendors. It’s too bad the day event was a bit of a dud, but the night one was a hit! Good food, beers, and awesome music. Looking forward to next year!